In the summer of 2010, The Ad Club was anticipating their 10th Anniversary of the Hatch Awards, the largest creative awards celebration in New England.  To promote the fall event and meet the renowned judges, we partnered with the SCVNGR team to create a trek leading to the “Meet the Judges” pre-event location.   I was charged with designing the locations, clues, and general operation of the trek.  Following these key guidelines, it was a huge success.

This seems like a no-brainer, yet investing the extra time to incorporate interesting places into your trek makes a tremendous impression. For this trek, we were fortunate to have a combination of Beacon Hill, the Waterfront, and Faneuil Hall.  This is an obvious playground of easily recognizable tourist locations, but the trick was to dig beyond the conspicuous monuments and find something new even to locals.  I tend to walk everywhere in Boston, so I started with an upper hand.  Further exploration resulted in clues/challenges placed on the Monopoly board in the giftshop of the Union Oyster house, a giant nautical compass at the end of a pier on the waterfront, and the entrance of a hidden, cozy bar frequented by most young statehouse employees.

We’re getting the two most obvious details out of the way first, but there are some tips to be learned.  First, use spaces creatively.  Not all challenges have to solve a riddle.  As a way to break participants out of their shell, we used the tall stairway in Government Center to imitate Rocky Balboa’s famous stair climb.  Some challenges involved visiting the Aquarium for a clue, so not only did you win points but you saw seals and penguins!  Finally, there were a few challenges that were multi-dimensional; you had to make it to a specific location, stand in a certain direction, and solve a riddle with clues in the city’s skyline in front of you.  These activities not only brought you to some locations that locals don’t even frequent, but they revealed new facts to even the most seasoned Bostonian.

You can complete a SCVNGR trek in any attire, but forcing everyone to look like you’re on a children’s field trip provides necessary advantages.  The first is the energy it creates.  Standing in Faneuil Hall, you could witness a sea of fluorescent t-shirts canvassing the area.  This drove competition between teams, as they could witness other competitors completing challenges.  Second, it demonstrates the scale of the event.  All tourists were quite aware something was happening, because they could distinguish our attendees from the crowd.  The excitement from our group was contagious to the rest of the public, and many stopped us to ask what the event was.  Finally, the most obvious, it’s a great opportunity for sponsorship.  The Creative Group came on board, and reaped a lot of visibility from this event while enabling all of the previous benefits of these shirts. 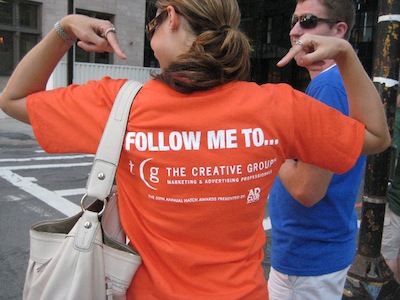 As you can see from the map in the first point, the locations of these clues do have some outliers.  This incorporates some strategy into the mix, to determine what challenges are worth more, and which path is more advantageous.  To add another variable to the equation, we brought Pedicab into the mix.  This was a concept of mine, as many of the Pedicab cyclists were personal friends. They were thrilled to participate, and facilitated much of the enthusiasm with their personalities and prompt transport from clue to clue.  To avoid people from abusing the privilege, we limited participants to a maximum of three clues/trips with the Pedicab.

When you have familiar locations or traditions, they lend themselves as a great opportunity to incorporate something unique for your trek.  The greatest example of this in our SCVNGR trek, was our use of Dick’s Last Resort.  You can’t go to Faneuil Hall without seeing a mob of Freshman girls with ridiculous, tall paper hats on their head.  Thus, we were going to suffer our participants with the same fate.  I persuaded the manager to give me two paper hats, and keep them at the host’s stand.  Before the event, I had two talented interns mark them up with relevant slander and logos of our sponsors (always wielding new ways of visibility for sponsors).  The challenge was to go to Dick’s, ask for the hats, and take a picture in them.  This proved to be a great way to incorporate a popular tourist activity, but make it unique for our group.

PR benefits all events (well, nearly).  Since our event was to promote the Hatch Awards, we certainly wanted to scale that message as much as possible.  BostInno registered and proved to be solid competitors throughout the entire trek.  Their promotion afterwards not only highlighted the approaching award ceremony, but put the spotlight on the SCVNGR team!

This is a common principle that should never be missed.  We were quick to thank all of our corporate sponsors, but also wanted to do something unique for the Pedicab crew.  These guys were a core addition to the event, and many guests forgot to tip their cyclists amidst all the excitement.  Luckily I knew most of them personally, so I could attest to a common favorite of the team: Narragansett.  I called in a favor with some friends connected to Gansett’s Boston account.  Along with a gratuity, I dropped off 3 complimentary cases of the Rhode Island courage as a thank you.  They had a fun night.